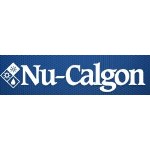 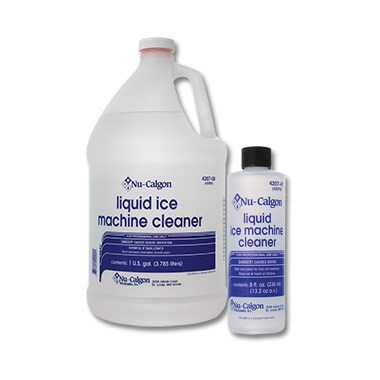 Liquid Ice Machine Cleaner is a 75% phosphoric acid of the highest food-grade quality. It is fast acting yet very safe to use and it does not give off any harsh fumes. Because of its 75% phosphoric acid content, it is the most concentrated ice machine cleaner in the market. It has a specific gravity of 1.63 and weighs 13.6 lbs. per gallon. Usage rate is 8 fluid ounces with three gallons of water. The number one category of problems troubling an ice machine are water-related, and the most frequently is lime scale. As the water is frozen into ice during an ice maker's cycle, the naturally occurring dissolved minerals in the water . . . some of which can combine to form lime scale . . . remain behind in the unfrozen recirculating ice water simply because water tries to freeze in its pure state. As the cycle continues and more water is made into ice, the minerals over concentrate and eventually precipitate as a lime scale deposit. As the scale begins to form, it creates a physical obstruction that results in: plugged distribution holes, restricted water flow and eventually the ice maker will hang-up or jam. Ice harvest is reduced and eventually the machine will shut down, requiring service. This sequence of events can affect both cubers and flakers. Some believe that flakers are free of scale problems since all of the water is made into ice. Not true. Flakers can scale-up as well, jamming the auger and eventually resulting in a broken belt or drive mechanism. Once the machine is scaled up, it must be cleaned, requiring the use of an acid so that the scale can be dissolved. Obviously, the acid must be effective in order to dissolve the scale but it must also be food grade and equipment-safe.