With just about all of our systems requiring a Thermal Expansion Valve (TXV) as a metering device, it's important to keep it functioning. Most manufacturers preset the TXV to maintain a superheat of 7 to 14 degrees F. Some valves can be adjusted in the field while some are fixed and cannot be adjusted.

Occasionally we will run into a system that will not maintain the 7 to 14 degrees superheat. Sometimes the reason may be that the needle pin located in the body of the TXV does not open and close per the load on the valve, causing a high superheat and a low cooling capacity. With a system that has not been evacuated correctly, any impurities in the system that the filter drier does not pick up will go through the TXV. After a time we could have a buildup on the needle pin causing it to stick so that it does not move smoothly up and down in the body of the TXV. The end result is the TXV can no longer maintain the desired superheat. 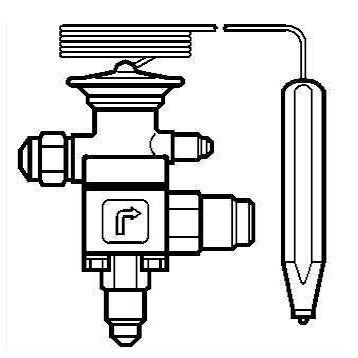 In many cases, we have found that by using A/C RENEW, a refrigerant oil additive, the success of breaking down the impurities in the valve was about 98%.

By pumping down the system and adding the 4 oz. bottle of A/C RENEW into the liquid line, followed by opening the liquid line service valve, the A/C RENEW goes right to the problem. Occasionally the valve may have to be exercised by removing the sensing bulb from the suction line and alternating the bulb into a warm and then cold water bath for about 5 minutes. This simulates high and low superheat and dissolves any impurities on the pin allowing it to move as designed to maintain the superheat.

This is something that can be tried to eliminate needing to change out the valve. However, if the valve loses the charge in the bulb the valve will have to be replaced.

Are you a homeowner or own a commercial property? Check out mybryantdealer.com/ to find a Bryant dealer near you!